Home Love Letters What it feels like to lose the person you thought was “The... 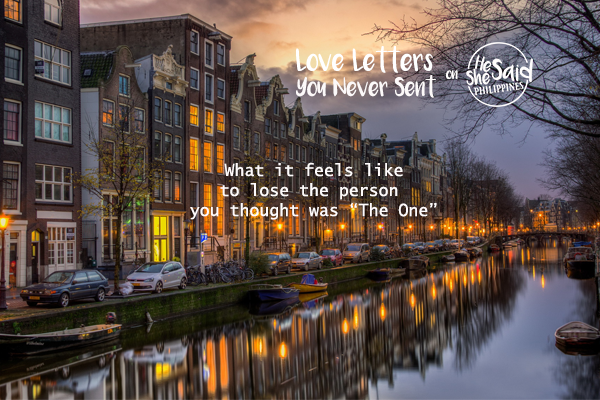 by Joanna Navarro | shared on He Said, She Said |

But you never did and I guess you never will. It took countless sleepless nights and even worse during daytime having to drag myself out of bed, wishing that the days would go on faster so I won’t have to go through the torture of you being on my mind all day. But you still do, every single waking day, and it’s just frustrating and draining to lose grasp of what’s left to hope for when really, there is none. I was caught off guard. Everything was going well. All the while, I thought we were just going through a rough patch.

But you let go. This wasn’t the first time it happened. Although this time, it felt different. I did not see the person I’ve loved for so long in you. Across me sat a stranger and I’ve never felt so alone and ever so scared in my life until that moment. The branch that I have been hanging on too tight for a while now, have decided to snap, basically dragging down a part of myself along with it. Everything that I used to believe in about you, about us, vanished without a trace.

Believe me when I say, it took courage and a lot of mantras about self-worth to move on from you. I was so proud of myself. It felt right to tell myself that I’m finally over you. And for a while there, I thought I am. But I’m not, at least not yet.

If I were to describe how it felt with you when we were together, it would be when Augutus Waters from The Fault in our Stars said, “I’m on a rollercoaster that only goes up, my friend”. With you, it felt right and as if there’s nothing that could break my happiness. We’ve known each other for 7 long years and with that amount of time, I never would have thought that the rollercoaster I’m on will ever come to a stop. Thinking that you were “the one”, made me put my entire self into our relationship to the point that your happiness mattered over mine – which I know was wrong, but I gladly did it anyway.

There’s no textbook that could provide you with instructions on how you could get over someone. When you’ve already imagined a future in a relationship yet it eventually goes down the drain, it can really mess with your head. Depending on how entwined your lives has become, it can feel like you need to start your life over from scratch.

Back then, I would always think to myself how lucky I was to have met my soulmate earlier than some people. I thought it was too far-fetched that we won’t end up together. I mean really, would you have doubted something that once made you feel so assured? Amidst every uncertainty I have in my life then, us was the only thing I’m sure of. Until it became that one thing I wasn’t sure of anymore.

After taking a hiatus from being in each other’s lives, you told me that you really want me back in your life, but this time, just as your friend. I could say no and throw everything back to you for causing me all the pain, but I didn’t. Instead, I told you that we could be friends and up to this day, I’m doing the best that I can to be there for you. Your family greeting me, the random meriendas we go to, us talking to each other on the phone for hours, all feel too ecstatic and too familiar that it sometimes hurt to think that all we’ll ever be is just friends and nothing beyond that again. But I’m all for it, even if it’s the only way for us to be back in each other’s lives.

You may not be “the one” for me, but you’ll always be my first love and that will never change. I’ve always been and always will be rooting for your happiness.

All my love for you,