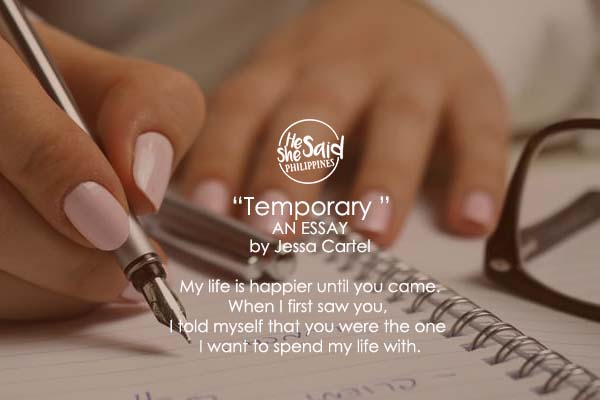 by Jessa Cartel | shared on He Said, She Said

My life is happier until you came.

When I first saw you, I told myself that you were the one I want to spend my life with.

We had our first talk. You have told me that you like me because I’m pretty.

My heart was changed into a soft and fluffy feeling real quick, that I never thought I would feel the same way again.

You said you loved me, I believed that.

All the words you’ve said were true, I felt that.

I thought that the feeling is mutual, but it isn’t. I believed in all your promises. That you won’t hurt my feelings like my ex’s did to me before. But you still did.

You said that being a couple isn’t a thing, because you love me and I love you that’s the important thing.

You changed my whole life. I always ended up choosing you, despite of our fights, anger, even our own flaws. I still want you to be with me until we get old. Until we’ve reached the whole universe. Until you get tired of everything, I will still love to chase you.

Even though we have a lot of differences, I will promise you that I wouldn’t change. I will promise that my love for you would always be there no matter what. Not just TEMPORARY but EVERLASTING.