Home Essays From Delicate to Numb 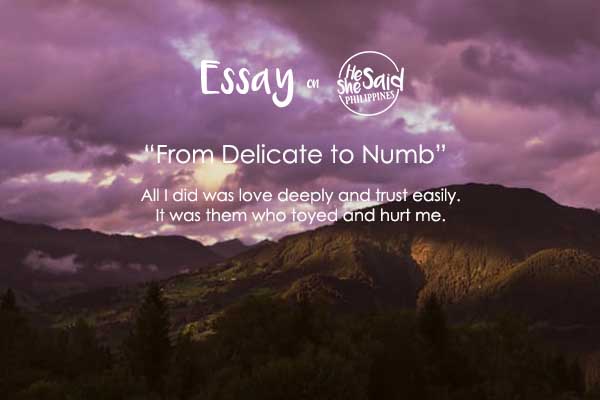 By Cho Amisola | shared on He Said, She Said |

I was that girl people always see smiling; little things made me happy and problems didn’t make me perplexed. My emotions were often palpable; people always saw right through me. They knew me as a person who doesn’t sway so easily. Someone who puts others first before her own self. Simple acts made me feel appreciated and valued. I was the cheerful girl.

Then love hit me. It was the first time someone cared so much for me and showed all the kind of loving must be given only to me. Everything was green meadows and butterflies, sugar and sweet. I was not at all the cheerful girl, but rather the happiest girl alive. I became the best version of me. I became profound and inspired. Everything I did was all out of pure happiness and love.

But I should’ve known that all things end – and at worst, some, abruptly.

I got succumbed to a sea of loneliness and despair when you decided to leave me. I asked myself, was I at fault? Did I do something wrong? Was our love not enough to make our relationship last? I guess it isn’t, because when I asked you why you were going to leave me, all you said was you’ve fallen out of love and that you were not really ready yet to enter a relationship so you wanted ours to end. I didn’t stop you, because I believe that if you truly love someone, you’ll let them go. If their happiness no longer includes you, or if they have found it from someone else already, you let them off your grip. You wish them well, and not be bitter about it. That’s what I did. I accepted everything and moved on. Grateful that at least we’ve become parts of each other’s lives, made out of that limited time together worthwhile.

I thought I was okay. I thought I could stand being without you. I missed you; your presence, your voice, your touch, your stares. I missed you so much that I even looked for you in some people. I demanded for comfort from people I didn’t entirely know. I became attention-seeker, tried to find it from others when in fact, yours was the only attention I was asking for.

Months have passed and you still didn’t come back. When I realized you have no plans of doing so, that’s when I stopped everything. I stopped loving, caring, trusting, feeling. I literally withdrew and isolated myself from people. I became afraid to get hurt and betrayed again. My life turned grayscale. Green meadows turned to dry lands, sugar and sweet became salt and tears. I became the girl people now see with a blank face. They soon found it hard to know what I feel inside. I became selfish and cold, impassive and detached, from delicate to numb.

I can’t blame anyone; it was I who transformed myself into this kind of monster. But when I think about it, should I really put the blame on me? All I did was love deeply and trust easily. It was them who toyed and hurt me. I wonder when I will be able to love again, so I can turn into that sweet girl they once knew. I wonder, too, if ever that happens, and got hurt again, will I become far worse than this?