Home Love Letters To the guy who broke her heart 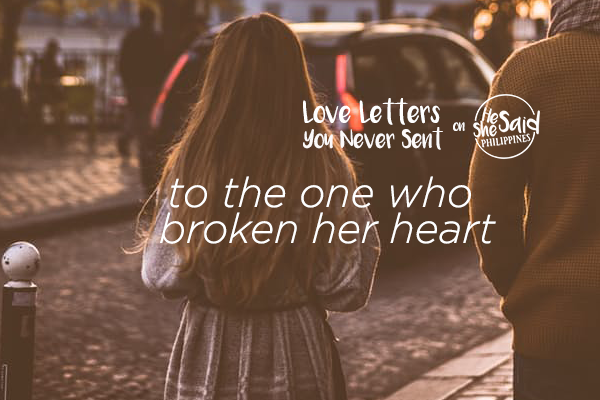 by Jemary Quijano | shared on He Said, She Said |

She may be struggling right now because of the pain you’ve caused her.

Her smile, is never the same as her smile before. The way her lips slowly curved into a smile, the way her smile slowly reaches her eyes. She loved you way too much more than a girl could offer.

But what happened? You broke her heart and she seriously doesn’t know how to mend it. You’re her best choice while she’s just a mere option for you. I really don’t know but I couldn’t even imagine the pain you’ve caused her.

She lost herself trying to find you.

You inflicted her with too much pain — the pain killed her many times, yet she stayed. She stayed because she loves you too much. Too much that she chose to be the girl she is not.

Haven’t you realized her worth? Are you even thinking of the storm you’ve brought into her life? Do you even see yourself being with her? With the girl who loves you so damn much? Are you even worthy of her precious tears?

She always dreamed of you being her end game. She loves you more than herself. She ain’t gonna stop until one day, she’s f*cking slapped by reality.

She’s not gonna have the entire you. She’s fighting a losing battle and maybe giving up is the best choice to save her f*cked up life and maybe it’s her time to find herself. That self she lost while busy finding you.