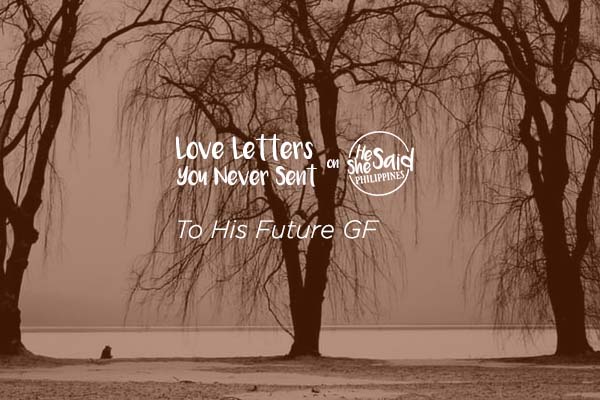 To his future girlfriend,

I don’t know who you are. Or if you’ve finally met him. But one thing is sure, you are the luckiest girl.

Take care of him okay? Don’t take for granted his efforts. They might be little and would make you think that it has no importance. But they are not. Little they maybe, you will only know the worth when he finally stops doing them.

He loves sending long messages, and if he does, appreciate it by sending also one.

He always says I love you. And though sometimes it may feel like a joke because of his casualty, remember that he is serious about it. When he holds your hand, hold on tighter. Don’t let go, please don’t let go.

Lastly, please listen to his voice. Smell his scent. Hug him tight and make every moment count.

Be the best girlfriend. Be everything that I failed to do. Because even though it hurts that I would never be you, I still hope and wish for his happiness. And I know, you could give him that.

To his future girlfriend, love him with all your heart. Because I never did it with mine.