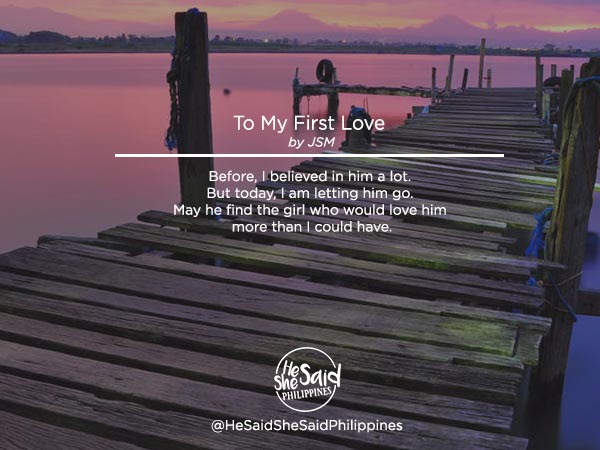 I was in a relationship with someone for a really long time and I broke up with him.

It hurts to know that he will never look at me the way I looked at him. I was in love, but he was just in a relationship. As what the movie line goes, “Mahalin mo ‘ko di dahil mahal kita. Mahalin mo ‘ko dahil mahal mo ‘ko ‘coz that is what I deserve and need”.

I broke up with him half-heartedly, because he never loved me, but saw me as a responsibility…a burden. I tried every way that I could just for him to see me as the girl he loved him the most. I loved him but I lost myself in the process. There was nothing left to offer. Letting him go was the least thing to do but it was for the best. Best for the both of us.

Days have passed. He never heard anything from me. I tried to control myself  so as not to contact him. With the span of days that we were not together, he gave me a million reasons that I should give him up.

Days have passed. I reminisced the dreams about us. I thought he might want me to stand outside his door but I was too afraid that I’ll be wrong. I never heard from him too. But I saw how happy he was without me. I was so stupid to think he would want me back in his life — like I hoped and prayed. All my dreams were shattered. I was a dreamer before he let me down.

Days have passed. I realized I was the only one who loved him. I realized I may be hurting right now but if I haven’t broke up with him, I might be hurting everyday if I kept my grip on someone who wanted to break free. I realized my love for him wasn’t enough. You can’t make someone do the same thing as you do for them.

I realized maybe I wasn’t made for him. Maybe I wasn’t enough for him. I should accept everything. I should blame all the heartaches to myself as the old saying goes, “Love isn’t blind; it sees, but it doesn’t mind.”

Before, I believed in him a lot. But today, I am letting him go. May he find the girl who would love him more than I could have. I hope that he will treat that girl better. I know now that I’m not the one whom he saw forever with. I wish him all the best.

I rest my case from here on. I am starting with a clean slate and writing my future without you.